Swalwell Drops Out Of Presidential Race 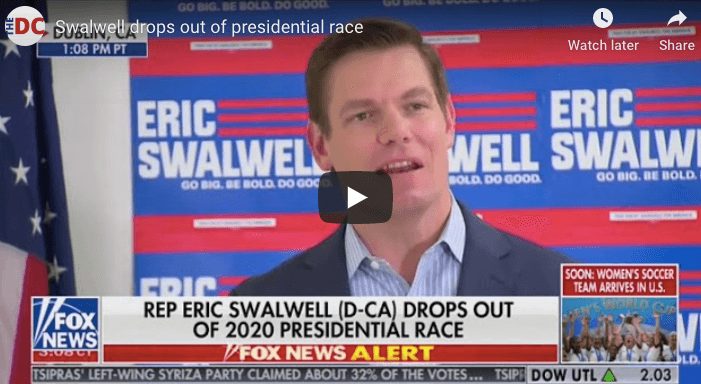 2020 Presidential candidate Eric Swalwell announced he is dropping out of the presidential race Monday at a press conference in California.

The California Rep. began his presidential bid three months ago, and was one of 24 main Democratic candidates. During his campaign, Swalwell struggled to gain traction and his poll numbers have peaked at 1%, East Bay Citizenreported. He is the first major Democratic candidate to drop out of the race.

“Today ends our presidential campaign, but it is the beginning of an opportunity in Congress with a new perspective shaped by the lives that have touched mine and our campaign throughout these last three months,” Swalwell announced Monday. “To bring that promise of America to all Americans.”

Five of Swalwell’s Fourth of July events were cancelled in New Hampshire last week, which encouraged rumors Swalwell would drop out. (RELATED: Eric Swalwell Says He And Fellow Democrats Are Heroes Like The Avengers)

Swalwell has been vocal about gun control throughout his campaign. His gun plan includes banning and buying back semiautomatic weapons, investing in “hope for our neighbors” and more, according to his campaign website.

“And [we] moved the needle on the debate stage on an issue that I’m very passionate about,” Swalwell said during his press conference Monday. “Believing that every candidate should pledge that they would support a ban and buyback of the 15 million assault weapons in our country.”

“And the one opportunity I had to do that, our three frontrunners that were on the stage with me, Vice President Biden, Sen. Sanders and Sen. Harris – all three said they supported it. So we’ve achieved that,” he added.

Swalwell qualified for the first 2020 Democratic debate in June and was led the charge in attacks on former Vice President Joe Biden regarding issues in his past. Swalwell called out Biden on his age, saying that it was time to “pass the torch.”

I was 6 when a presidential candidate said it is time to pass the torch to a new generation of Americans. That candidate was Joe Biden. He was right 32 years ago. He’s still right today. Let’s #PassTheTorch!

Help me fight for YOU! Donate $1 now: https://t.co/n0sDpUiItypic.twitter.com/GtxJ4JdGZ6

“But Joe, I was 6 years old when a presidential candidate came to the California Democratic Convention and said, ‘It’s time to pass the torch to a new generation of Americans,’” Swalwell said during the June debate. “That candidate was then Sen. Joe Biden.”

He will now have to officially decide whether to seek reelection for his seat in the 15th Congressional District. Aisha Wahab, a Hayward City Council member, announced her bid to replace Swalwell last April. Wahab has not decided if she will continue this campaign if Swalwell returns, EB Citizen reported.

No other Democratic candidate who made the cut for the first debates has dropped out yet. Swalwell has been teetering just outside of qualifying for the second Democratic debates in July, New York Mag reported.