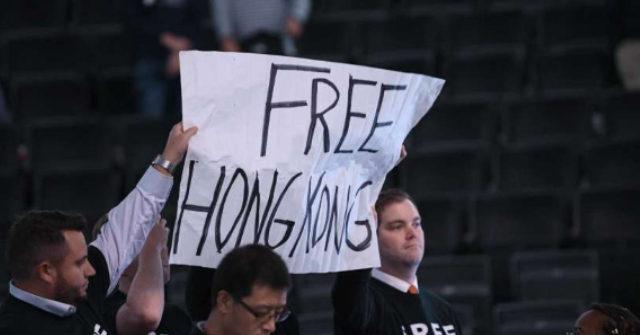 Wizards spokesman Scott Hall confirmed the incident to CNN, saying building security made the move “in accordance with Capital One Arena’s long-standing Signs, Banners, Posters, and Flag Policy. No fans were asked to leave the game.”

“The [NBA’s Ted Leonsis] will claim ‘political’ signs are not allowed. But this is hypocritical because they actively encourage their players to be political. Example: #icantbreathe shirts worn by NBA players at the games. Why can’t fans do [the] same?” he tweeted.

One of the attendees, Jon Schweppe, posted several videos to Twitter showing the signs being taken.

“Just had our ‘Free Hong Kong’ sign confiscated at Capitol One Arena at the Wizards game against the Guangzhou Long Lions. #FreeHongKong #NBA #Censorship,” Schweppe wrote in his first tweet from the game.

Schweppe added that he and other attendees were wearing T-shirts that read “Free Hong Kong.”

“We are currently standing tall behind the basket with our Free Hong Kong shirts on. We were told if we do another sign we will be removed. Standing tall in our [t-shirts],” he noted in another tweet.

Schweppe also said security took a sign that read, “Google: Uyghurs,” in reference to the Muslim minority ethnic group that has reportedly experienced extensive human-rights abuses by the Chinese government.

The confiscation came as the NBA falls under scrutiny following the Houston Rockets general manager’s deletion of his pro-Hong Kong tweets.

“It is inevitable that people around the world — including from America and China — will have different viewpoints over different issues,” NBA commissioner Adam Silver said in the statement. “It is not the role of the NBA to adjudicate those differences.”

Hong Kong has experienced about four months of demonstrations, which were partially sparked by a since-withdrawn extradition bill that would have potentially sent Hong Kong residents convicted of crimes to mainland China for trial.

The bill was one of multiple demands made by Hong Kong residents who have kept the protests going. Others include Chief Executive Carrie Lam’s resignation, an inquiry into police brutality, the release of those who have been arrested and more democratic freedoms, according to CNN.Monumental Sports, which manages guest relations at Capital One Arena, did not immediately respond to the Daily Caller News Foundation’s request for comment.