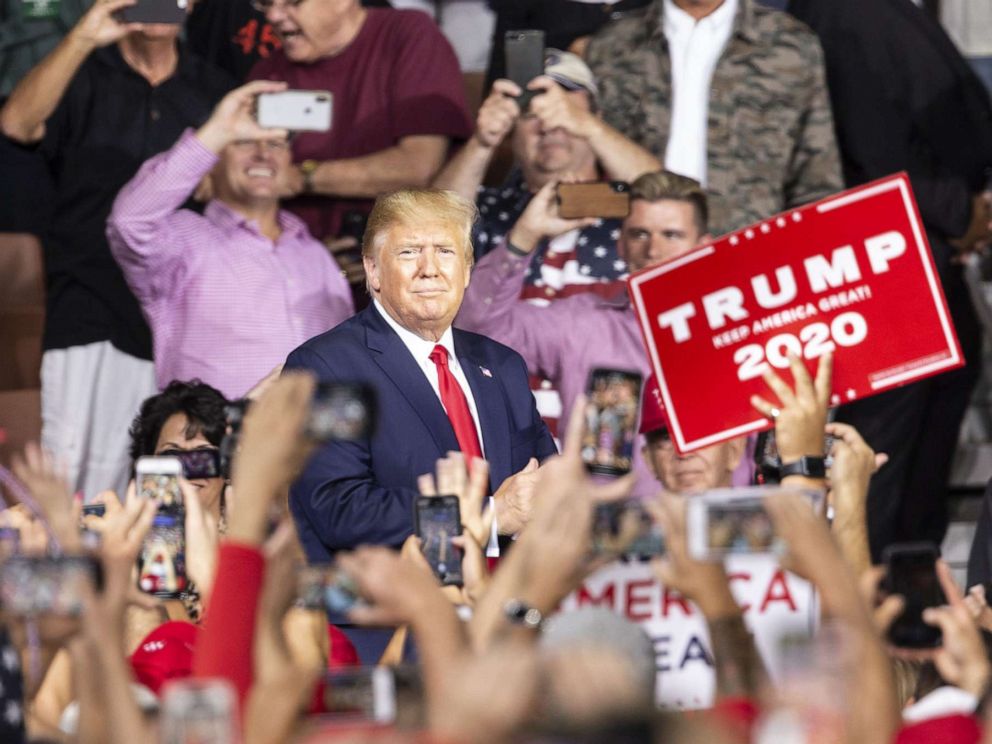 President Donald Trump held a campaign rally Thursday night in Minneapolis, the first since House Speaker Nancy Pelosi announced the launch of a formal impeachment inquiry against him.

Here are three checks on his claims.

A majority of the Islamic State fighters the U.S.-led anti-ISIS coalition captured did not hail from Europe, as Trump claims, but rather from Iraq and Syria, according to a recent Department of Defense report. Of the approximately 10,000 prisoners being held in the Syrian Democratic Forces-run detention centers, about 8,000 are Iraqi or Syrian nationals. The other 2,000 fighters come from more than 50 other countries, including some European nations.

James Jeffrey, Trump’s special envoy to the Global Coalition To Defeat ISIS, said the same numbers in an Aug. 1 statement.

China’s economy had an estimated value of $13.6 trillion in 2018, according to the most recent data from the World Bank. Gross domestic product (GDP), a factor commonly used to measure economic performance, is up approximately $1.5 trillion from $12.1 trillion in 2017, the year Trump took office.

The World Bank also reports that the value of the U.S. economy, measured by GDP, in 2018 was about $20.5 trillion. That figure is up roughly 1 trillion from 2017’s GDP of approximately $19.5 trillion, according to the World Bank.

Similar figures for both countries were reported by the International Monetary Fund (IMF).

The U.S.-China trade war, some noted, has slowed the economic growth of both countries. Estimates for the GDP costs in both nations vary, but most are less than 1%.

IMF Managing Director Kristalina Georgieva has said that it could also cost the global economy a projected $700 billion by 2020.

Claim 3: “Since coming into office, I have reduced refugee resettlement by 85%.”

Each year, the president sets the maximum number of refugees who may enter the country in a fiscal year, which runs from Oct. 1 to Sept. 30 of the following year, in consultation with Congress.

Under former President Barack Obama, the annual refugee cap peaked at 110,000 in fiscal year 2017, though the freeze Trump instituted shortly after taking office that year likely curbed the number that actually got admitted, according to The Washington Post. Since then, the Trump administration has drastically reduced the cap, with a maximum of 30,000 refugees allowed to resettle in the U.S. in fiscal 2019. That’s a 72.7% decrease from Obama’s last year in office.

Trump’s proposed cap of 18,000 for fiscal year 2020, the lowest that it has been since the resettlement program started in 1980, would mark an 83.6% decrease – close but slightly lower than the figure Trump cited in his rally.

The president does set the cap; however, the number of refugees who actually get admitted into the U.S. typically falls short of that. In fiscal 2017, 53,700 refugees were admitted. Two years later, in fiscal 2019, there were 22,500 refugees, a decrease of 58% according to data compiled by Pew Research Center.

Elias Atienza contributed to this report.