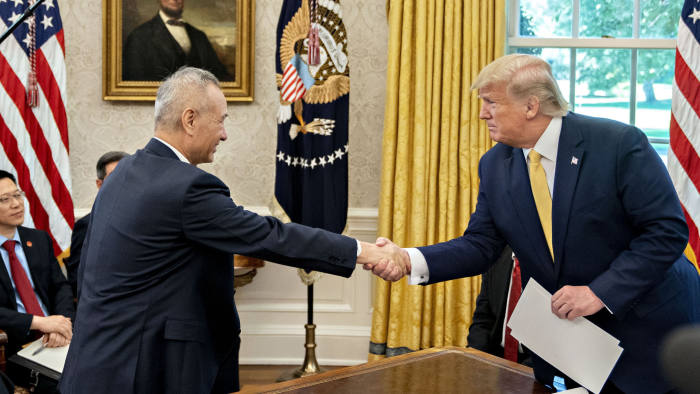 President Donald Trump said the U.S. and China reached “phase one” of a tentative trade deal after he met with Chinese Vice Premier Liu He Friday.

The announcement comes amid a 15-month-long trade war involving tariffs, blacklists and threats to and from both countries as the administration attempts to hold China accountable for its trade tactics.

The president told reporters in the Oval Office Friday that the two countries came to a “very substantial phase one deal,” which could be signed in November, that will address concerns regarding intellectual property theft and financial services.

He added that China also agreed to buy “$40 to $50 billion worth of agricultural products.”

“I suggest farmers have to go and immediately buy more land and get bigger tractors. They will be available at John Deere and a lot of other great distributors,” the president said, adding, “Phase two will start almost immediately” after phase one is signed.

The U.S. will suspend a planned tariff increase on Chinese goods.

Trump concluded by saying he has “great respect for China” and offered congratulations for the 70th anniversary of the People’s Republic.

A translator for Liu said the Chinese are “happy” about the trade deal and will “continue to make efforts.”

“We very much agree that to get to the China-U.S. economic relationship right, it’s something that is good for China, for the United States and for the whole world. And we are making a lot of progress toward a positive direction. … We are happy about it. We’ll continue to make efforts,” the translator said on behalf of Liu.

The president tweeted Friday morning, “Good things are happening at China Trade Talk Meeting. Warmer feelings than in recent past, more like the Old Days. I will be meeting with the Vice Premier today. All would like to see something significant happen!”

“One of the great things about the China Deal is the fact that, for various reasons, we do not have to go through the very long and politically complex Congressional Approval Process. When the deal is fully negotiated, I sign it myself on behalf of our Country. Fast and Clean,” he added.

The 13th round of talks between trade officials from both countries started Thursday. The Dow Jones Industrial Average increased by over 300 points Friday in anticipation of a positive trade agreement, according to CNBC.

The U.S. Commerce Department added 28 Chinese firms Monday to a trade blacklist for being implicated in the abuse of Muslim minorities in China’s northwestern Xinjiang region.