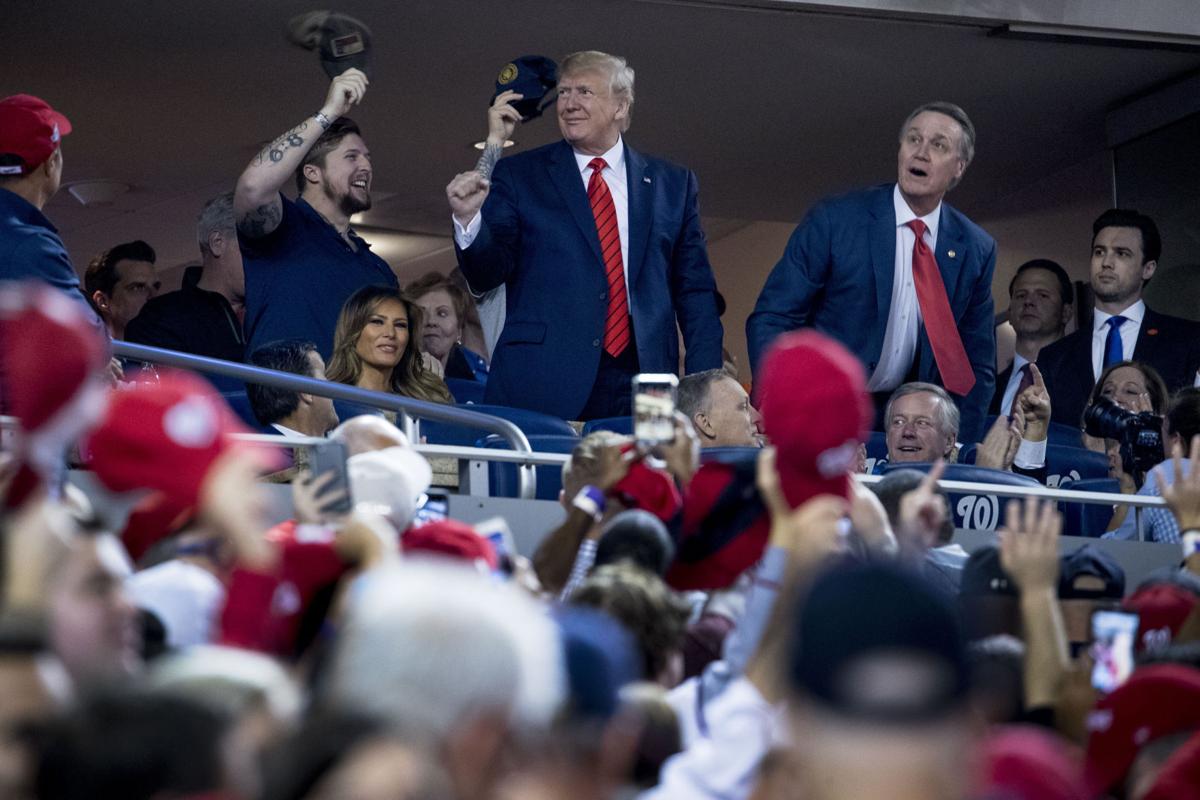 MSNBC’s “Morning Joe” co-hosts blasted Americans who began to chant “lock him up” at President Donald Trump during Sunday’s game five of the World Series.

Trump was introduced before the World Series game at National Park in Washington, D.C. Sunday and was greeted with the “lock him up” chant and boos. Co-hosts Joe Scarborough and Mika Brzezinksi reacted to the greeting Monday, with Scarborough noting that it “started with” the president and Brzezinksi adding that it was “sickening.”

“Sickening, we are Americans,” Scarborough said after Brzezinksi noted expressed disgust when the chant happens at Trump rallies. “And we do not do that. We do not want the world hearing us chant, lock him up, to this president, or to any president, that’s what I’m saying, let’s hope, as we move forward, maybe this is one less fascist tactic he and his supporters use, during chants.”

This phrase has been heard over the past three years at Trump’s campaign rallies and is aimed at former Secretary of State Hillary Clinton, who was also his political rival in the 2016 presidential election.

“Again, it is un-American,” Scarborough said. “And it started with Donald Trump. In fact, he’s made it a centerpiece of his campaign rallies.”

After the show, media pundits went after Scarborough and Brzezinksi for condemning the chant, with many writing that the president has earned it.

CNN analyst Asha Rangappa tweeted that the chant calls “for accountability” when Americans do it, but when it happens at Trump rallies it is “authoritarianism.”

MSNBC justice and security analyst Matthew Miller had two points to make, tweeting Monday that “Trump has changed the norm” and that “there’s an obvious difference between politicians” leading this chant and citizens doing it. Freelance writer Marisa Kabas wrote that “He’s committed….many crimes.”

“It was disgraceful to chant ‘Lock her up!’ to a woman who committed no crimes,” actor and filmmaker Rob Reiner wrote Monday. “It is the furthest thing from disrespectful to yell ‘Lock him up!’ to a man who has committed countless crimes.”

The president attended game five of the World Series Sunday alongside a group of Republican lawmakers and his wife Ivanka Trump. The Washington Nationals confirmed Oct. 25 that they did not invite Trump to throw the first pitch during Sunday’s game. Instead, the baseball team asked Jose Andres, a celebrity chef who owns several D.C. restaurants and has been critical of the president, to throw the pitch.

Trump told reporters that he’d be attending game five, but wasn’t interested in throwing out the first pitch, just a day before the team confirmed he had not been asked.

Christian Datoc contributed to this report.