Here’s What You Missed From The First Public Impeachment Hearing 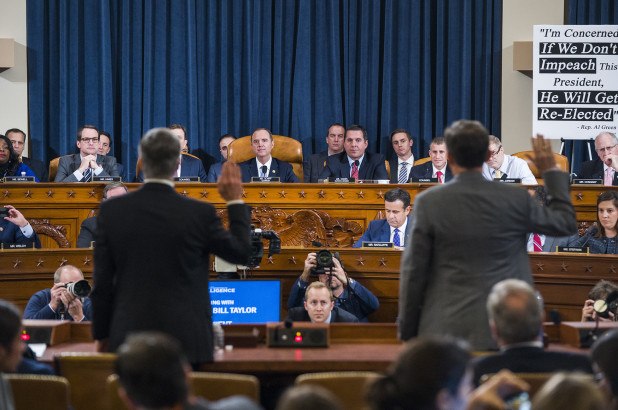 Wednesday marked the first public impeachment hearing into President Donald Trump over his phone call with Ukraine, and the House saw much more than just testimony.

U.S. diplomat in Ukraine William B. Taylor Jr. and senior State Department official George P. Kent testified publicly Wednesday surrounding the allegations made by a whistleblower in August that the president had asked Ukraine to look into former Vice President Joe Biden and his son, Hunter.

The hearing began with Republicans using their opening statements to probe House Intelligence Committee Chairman Adam Schiff over whether or not to out the whistleblower. Republican Ohio Rep. Jim Jordan accused Schiff of being the only person in the House to know the identity of the whistleblower, and the congressman replied with his denial.

Republicans also expressed curiosity regarding allegations that Hunter was paid $50,000 a month by a Ukrainian firm. Kent was unable to answer what qualifications made Hunter able to serve on the board and get paid such an amount.

Taylor testified that, to his knowledge, the “Ukrainians were not aware of a hold of assistance” at first. Allegations against the president include that aid was being withheld from Ukraine to get the country to investigate Biden. Jordan jumped on this, asking how there was quid pro quo despite the evidence that Taylor testified about.

“Democrats are pushing impeachment forward without the backing of a single Republican,” Republican House Intelligence Rep. Devin Nunes said as he summed up his view of the impeachment inquiry.

Check out the latest from the Daily Caller News Foundation video team and subscribe to our YouTube channel to be sure you never miss out!