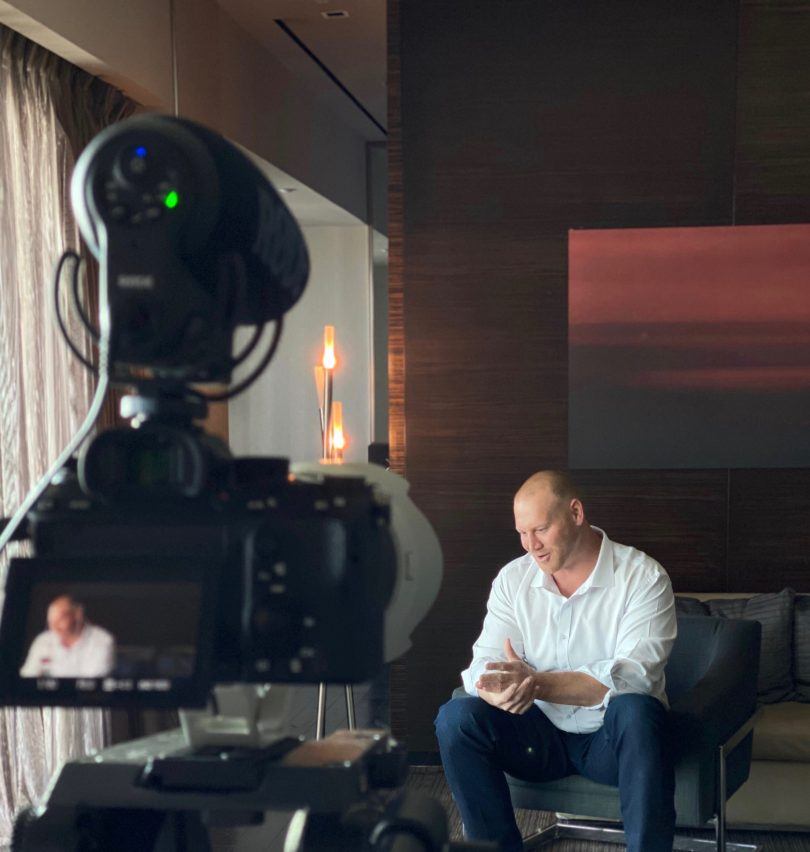 AMERICAN WIRE
DECEMBER 20, 2019
LAS VEGAS — Dan Rodimer, the former WWE pro-wrestler nicknamed by none other than Vince McMahon, has stepped into a much different ring these days.

Lee, who voted in favor of the impeachment proceedings, is one of 31 House Democrats running in a district President Donald Trump won in 2016. Trump won the district by one percentage point, and the seat is one of 55 races the National Republican Congressional Committee (NRCC) has targeted with a recent poll showing Lee’s approval hovering at 43 percent. Lee was undecided in her impeachment vote until last Friday, yet she was one of a handful of vulnerable Democrats who attended Trump’s White House congressional ball last week.

In Nevada, 2020 remains the year of the political outsider, and getting to know what makes each person tick. Here’s a glimpse into getting to the former WWE wrestler.

So, tell us why are you running for Congress? Why are you doing this?
“I’m running for Congress because I’m a father of five and worried about my children and their future. You know, I’m a small business owner, community leader, on the Clark County School Safety Advisory Board, and at the same time I’m someone who is definitely a political outsider. I mean, I was in the WWE working as a pro-wrestler, so I bring a different background to running for Congress against socialist Susie Lee. To be a professional athlete in any sport takes commitment, determination, and discipline. This — on top of a competitive nature — makes me a refreshing, and new type of Congressman.

What’s also a little different about me is I received my law degree from Ave Maria School of Law in Florida. I use the analytical skills I acquired from law school in my everyday life. For example, one of my biggest accomplishments is working on a school safety bill right here in Clark County. My fellow Nevadans need someone who isn’t afraid to mix it up a little and stand tall for the issues that really matter to us.”

What are the top issues your running on?
“When I’m in Congress my biggest issues will be fixing our education system, helping grow our economy, strengthening businesses that create Nevada jobs, supporting our military and veterans, defending second amendment rights, and fixing our broken healthcare system. I’ll make it simple: there are a lot issues my fellow Nevadans want to get done. And instead, Susie Lee is focused on impeachment in a district our President won. She has voted with the Squad more than 95% — it’s clear she’s linked arms with Democratic establishment in Washington D.C., instead of focusing and caring about her constituents.“

What experiences have best prepared you ready for running for office?
“I’m a horse of a different color. Like I mentioned before, I’m a former WWE wrestler and definitely not a politician. All my life I have had to roll up my sleeves and work hard for my achievements. Growing up I was the middle child and bussed tables at a local bar starting when I was 13 years old. In college I played football at the University of South Florida. I worked a number of odd jobs including a waiter at one point! I graduated from Ave Maria School of Law, and while I was there I continued to learn how to overcome my learning disability. Growing up my parents valued education and they pulled their retirement savings to send me to an all boys prep school because I was failing out of pubic school. I like to joke that I don’t have a learning “disability,” I just learn differently. Now, I think that every child learns differently, which is why education is a huge priority in my campaign. But, I share all of this because I want my fellow Nevadans to know that as their next Congressman I will take the same ‘work hard’ mentality to Congress.“

What do you enjoy most about running for office?
“That’s easy – meeting each person in my district has been so rewarding. I spend a lot of time meeting constituents and hearing how they want change. I talk to small business owners and I hear the regulatory struggles they face. I also meet a lot of middle-class families who are struggling and looking for someone like me to advocate for better tax breaks.“

What is the hardest thing about running for office?
“Being away from my family is always the toughest part of any job. My wife Sarah and I have five children – Bella, Sylas, Attice, Valentine, and Violet. We always try to have dinner together, attend church, or do something together once a week.”

We hear Sean Spicer is running your race? Can you tell us about that?
“Yes, Sean Spicer is running my race! We launched my race on Fox & Friends in late August, along with the digital aspect of the campaign. I won’t go into to much detail, but I encourage people to watch our race and see what we have coming up next!”

Susie Lee will have a war chest to keep her seat. How is fundraising and building your war chest?
“I’m glad you brought that up – in less than eight weeks I made the NRCC’s Young Gun Program and hit my first goal of $250,000. I will definitely be hitting the next phase of the Young Guns Program at the end of December. But raising money isn’t everything. My campaign is built on grassroots and I already have more than 1,200 who signed up to get involved with my team. So between that, knocking doors alongside the Nevada GOP, and building my coalitions we are in an excellent place for next year’s election.”

Can you share a fun fact about you?
“Of course I can. Well, it’s not really fun – but my favorite wrestling story was when I wrestled John Cena. I was still learning different moves and the technical aspect behind them, and John asked me to do what we call a “DDT.” It’s a reverse headlock and you basically get slammed into the ground. Long story short I did not know how to do it that well and ended up breaking my neck. That closed the WWE chapter in my life, but certainly opened up many new ones, including many family ones!”